When are mice more than mice? When they have been genetically engineered to be part human. 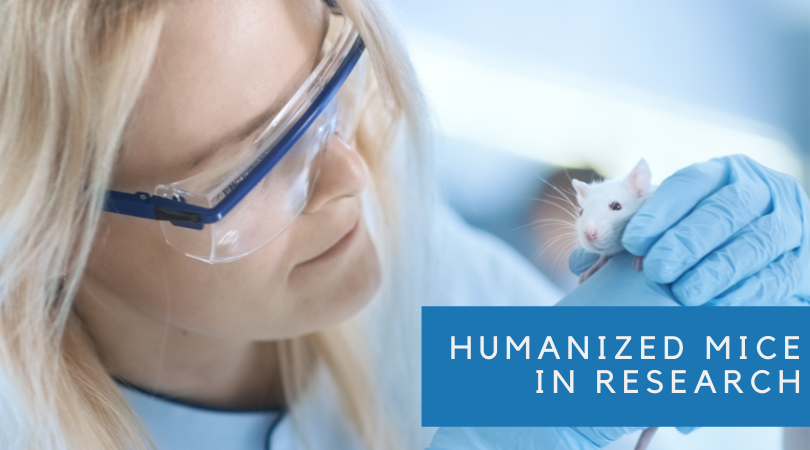 Laboratory mice have been used in preclinical research for hundreds of years, and they have been invaluable in helping scientists learn how the body works, study immune responses to diseases, and test drugs and other treatments. But while mice are valuable research models, they’re still mice, and that means researchers need to translate discoveries made in mice into solutions that work in humans.

In recent years, researchers have found a partial solution to that problem: humanized mice.

What Are Humanized Mice?

Humanized mice are mice that have been genetically modified to carry functioning human material, including genes, cells, tissues, or organs. Previous efforts to create humanized mice have resulted in mice that carry a tiny amount of human matter—about 0.1%—but more recent versions have increased that percentage significantly. In May, scientists at the University at Buffalo announced they had created mouse embryos that contained up to 4% human cells—the highest level of human cells ever instilled in a non-human creature.

Why develop humanized mice? Mice that contain human cells can be used to mimic human conditions, allowing researchers to determine how the human body reacts to pathogens and develop potential treatments without involving humans until the later stages of testing.

The mouse genome is actually fairly similar to the human genome, so mice are already somewhat adaptable to mimicking human biological qualities or processes. In 2014, the mouse ENCODE project, a program supported by the National Human Genome Research Institute, part of the National Institutes of Health, built a comprehensive catalog of functional elements in the human and mouse genomes. The data was provided to the biomedical community to help researchers understand the specific differences and similarities between the human and mouse genome and identify the ways in which mouse biology mirror human biology.

Humanized mice have already been sought after as a more effective means of studying human disease and function, but efforts to create a “better” humanized mouse have been on the fast track since the coronavirus pandemic began. Conventional mice don’t naturally become infected with COVID-19, so they can’t be used as models for studying how the disease works or efforts to find a cure.

Researchers working to find a vaccine or treatment for COVID-19 desperately needed a humanized mouse model, but not just any humanized mouse. In order to be effective as a model for COVID-19, researchers needed mice that produce a human version of the protein ACE2, which the SARS-CoV-2 virus attaches to in order to gain entrance to cells.

During the severe acute respiratory syndrome (SARS) outbreak in 2002, which was caused by the SARS-CoV coronavirus, researchers at the University of Iowa bred just such a mouse, but the SARS pandemic was contained before the mice could be used to create a vaccine. While the SARS mice were never used, their sperm was frozen, and earlier this year researchers at The Jackson Laboratory were able to use it to generate hundreds of COVID-19-susceptible mice, which were shipped to researchers around the world.

The Jackson Laboratory has developed other humanized mouse types for specific diseases, including cancer, infectious and inflammatory disease, and hematopoiesis. Taconic Biosciences, another major player in the humanized mouse model market, in June announced an exclusive agreement with the University of Texas Medical Branch at Galveston to distribute humanized ACE2 mice for coronavirus research. Other companies developing humanized mice include Envigo RMS, genOway, HuMurine Technologies, and Harbour Antibodies. The National Institutes of Health has also awarded a grant of $1.2 million to the Mouse Biology Program at the University of California, Davis, to create mice that are susceptible to the COVID-19 virus.

Humanized mouse models represent the potential for a deeper understanding of human biological systems that will give researchers important insights into human diseases, therapies, and immune processes, for COVID-19 and beyond.