Mice vs Rats in Research: What’s the Difference?

Rodents, usually rats and mice, have been the most commonly used animals for biomedical research for more than a century for a number of reasons: they are readily available, easy to handle, and very similar to humans physiologically and genetically. What is the difference between a mouse and rat?

While there are similarities between mice and rats, there are several significant physiological and behavioral differences between the two that researchers need to consider when deciding which to use for a specific application. 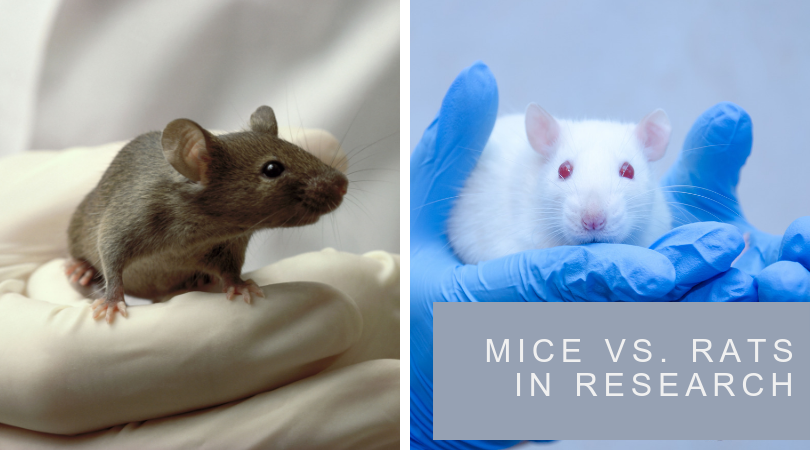 Size: Adult rats weigh up to ten times more than adult mice, which makes them the preferred model for applications that involve surgical procedures, especially involving the brain and spinal cord. Surgery is generally easier in a larger animal, and causes less tissue damage. Imaging can also be more effective with rats because the larger size of the animal offers better resolution. The smaller size of mice does offer some advantages, including requiring lower drug dosages, which makes them more cost-effective in drug development research. Mice are also better models for optogenetics, since their smaller brain size makes it easier for light to reach deeper brain regions.

Handling: Rats are easier to handle and show less stress when being handled by humans. They can also be trained to hold still for some procedures, eliminating the need for anesthesia. Mice are more prone to stress from repeated handling and are more likely to need sedation for procedures.

Social behavior: Rats and mice are quite different in social cognition, which can be important in research for disorders including schizophrenia, attention deficit disorder (ADD), autism spectrum disorder (ASD), and mood disorders. Rats tend to enjoy being with other rats and are less territorial and less aggressive in social situations. Mice are generally more averse to interaction with other mice and show more aggressive behavior in social situations with other mice.

Addiction and impulsivity: The brains of mice and rats handle the delivery of serotonin and dopamine differently, which means they behave differently in terms of habit formation, impulsivity and other situations related to mood, addiction, and some psychiatric disorders. Rats show more compulsive and additive behavior, more impulsive behavior, and less self-restraint in waiting for a known reward. Mice are less impulsive and more able to control premature responses. Mice and rats have been shown to react very differently in their response to alcohol, nicotine, and MDMA.

Cognitive behavior: Cognition in rodents is often studied in relation to dementia, schizophrenia, and other psychiatric and neurological disorders in humans. Rats are superior at maze-learning, show a higher level of strategy, and show more stable performance in longer cognitive tests. Mice exhibit less strategy in their maze-learning, often needing substantially more training and practice to learn a maze, and experience more stress and anxiety while doing so.

Over the last two decades, researchers have increasingly used mice models more often than rats, primarily because of their superiority as genetic models. The first recombinant mouse model was identified in 1987, compared to 2010 for the first recombinant rat model. Now that gene-editing technologies are available for both mice and rats, researchers will have even more options in their quest to find the right rodent model for each research application.