The Gender Factor: How Diseases Affect Men and Women Differently

One of the most interesting things scientists have discovered about COVID-19 is that men seem to be more susceptible to the virus, and to suffer more serious symptoms. 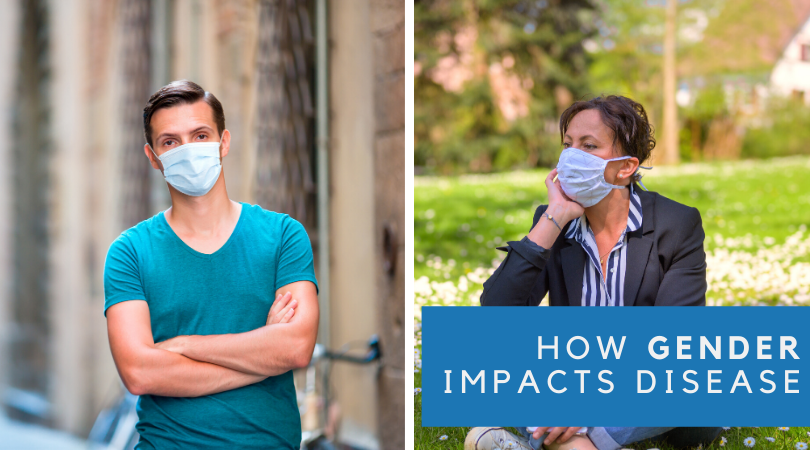 There are a number of theories for why this may be, including that men have higher levels of a protein called angiotensin converting enzyme 2 (ACE2) found on the surface of cells in the major organs and in the gut. COVID-19 infects healthy cells by binding to the ACE2 protein, so the fact that men tend to have higher ACE2 levels than women could increase their risk for coronavirus infection.

Other scientists have speculated that women’s higher levels of estrogen, which is an anti-inflammatory compound, may offer some level of protection against infection, and women’s immune systems, bolstered by the extra X chromosome, may be better at fighting the virus.

Whatever the reason, it wouldn’t be the first time disease has affected men and women differently. In fact, gender can make a big difference in how diseases affect people, including determining what symptoms they display and how well they are able to fight the disease.

Variations in Symptoms, Biology, and Behavior

For example, men and women tend to have very different symptoms when experiencing a stroke. While men more often have well-known symptoms such as slurred speech and drooping on one side of the face, women often experience a headache, anxiety, confusion, and pain in the jaw or neck.

The same biological variations that may cause gender differences in COVID-19 cases—estrogen and the extra X chromosome—are also implicated in other diseases. Estrogen’s anti-inflammatory properties may cause women to have fewer infections, heart attacks, and strokes, but because estrogen has such strong ties to the immune system it can also cause women to have higher rates of autoimmune diseases such as multiple sclerosis, lupus, Guillain-Barre syndrome, and fibromyalgia.

Behavioral and societal factors related to gender also shape how diseases affect men and women differently, including smoking, excess drinking, drug abuse, stress, anger, and social isolation, all of which are more prevalent among men. Men are also less likely than women to eat a healthy diet or visit the doctor regularly, which makes them more likely to become ill, or to delay treatment for an ongoing condition.

The need to better understand these differences has led researchers to increasingly use both men and women in clinical trials, and has even encouraged researchers to use both female and male mice in preclinical research.

In  fact, a 1993 federal law requires that researchers include both men and women in all clinical trials unless there is a specific scientific reason why only one sex should be included, and in 2014, the National Institutes of Health (NIH) issued a requirement that grant applicants use both male and female animals in their laboratory work.

The change is already taking effect. In a review of biomedical research articles published in 2019, 49% used both male and female subjects, up from 28% that used both genders in a similar review in 2009.

As research continues to become more gender-balanced and more research is done on how disease affects genders differently, scientists and healthcare workers hope to learn better ways to understand, treat, and fight a wide variety of illnesses and conditions.