The cold is the most common known infectious illness, with Americans getting an estimated 1 billion colds every year.

Colds are difficult to prevent and treat, and so far have been impossible to cure. After hundreds of years of accepting colds as an unavoidable nuisance best treated with chicken soup and rest, an actual cure for the common cold may be in reach. 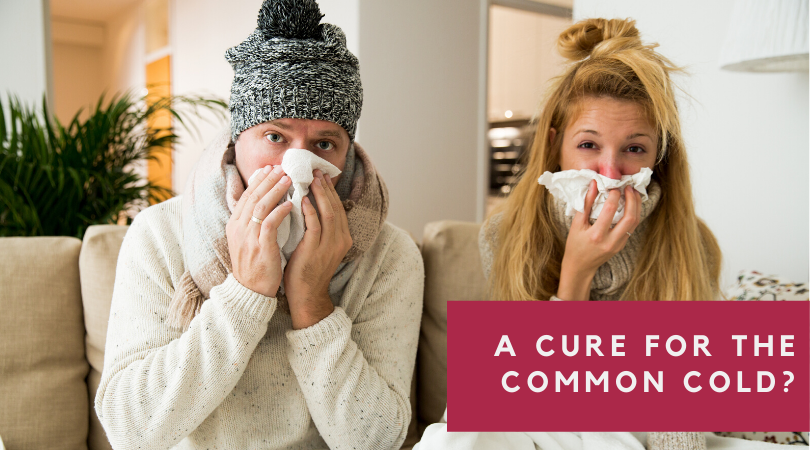 The History of the Common Cold

For as long as the common cold has been around, scientists have been trying to find a cure.

In ancient Egypt, cold sufferers were told to treat it by reciting a magical spell, while the ancient Romans recommended wolf’s liver in mulled wine. Other “treatments” have included eating mustard or milk-soaked onions, wearing nutmeg around your neck, or inhaling chlorine gas. Needless to say, none of these methods worked.

In 1946, the U.K.’s Medical Research Council established a Common Cold Unit in Salisbury, where doctors infected multiple groups of 30 human volunteers (lured by an all-expenses-paid vacation in the countryside of southern England) with cold viruses to study how their bodies responded to the infection over a 10-day period.

While the Common Cold Unit studied more than 20,000 volunteers and yielded some important knowledge, including the fact that colds are caused by viruses, no cure was found, and the unit was closed in 1990.

In 1953, an epidemiologist named Winston Price tried to create a cold vaccine using a method that had shown success with other vaccines, in which the host is exposed to a small amount of the virus, which provokes an immune response and “teaches” the body to fight subsequent exposures to the virus. Though the “vaccine” was effective against a single virus in initial experiments, it did not prevent colds in subsequent trials.

In the 1960s, by which time several more types of cold viruses had been discovered, scientists at the University of Virginia made another attempt at developing a vaccine, this time by injecting patients with 10 different types of cold virus at once. This approach was also a failure.

In 2008, researchers at Imperial College London were able to create a mouse model that could catch cold, the first non-primate that was susceptible to the cold virus. Being able to pass on the virus to mice and study how the viruses work was an important step in setting the stage for further research.

New Hope for a Cure

In the latest breakthrough, a new study by researchers at Stanford University and the University of California in San Francisco have identified a way to prevent colds by targeting a protein in our own cells, an approach that has previously worked with asthma, encephalitis and polio.

According to a press release from the research team at Stanford, there are roughly 160 known types of rhinoviruses—the type of virus that is responsible for the majority of all colds. Not only are there many variations of rhinovirus, they are also highly mutation-prone, which makes them quick to develop drug resistance and too unpredictable to enable scientists to develop an effective vaccine.

In the new study, researchers discovered that one specific protein must be present in order for cold viruses to travel within the body. By blocking that protein, they were able to prevent a wide range of viruses, including rhinoviruses, from replicating inside cells.

First, researchers infected cultured human cells with enteroviruses (a genus that includes rhinoviruses), and by the process of elimination were able to determine which genes appeared to prevent the viruses from proliferating. One of those genes encodes an enzyme called SETD3.

Using what they had learned working with human cells, researchers continued their research with live mice. Mice bioengineered to lack SETD3 grew to healthy adulthood and were immune to infection to two distinct enteroviruses even when the viruses were injected into their brains immediately after birth.

The next step is to develop an antiviral drug that can keep the virus away from the target protein. Until then, stock up on chicken soup.