How important is the comfort and “happiness” of the mice we use in research? Providing laboratory animals a comfortable, safe, and enriching environment that gives them a way to play and act in accordance with their natural instincts is more than kindness; multiple studies show that it actually makes them better research subjects and leads to better outcomes with greater scientific validity. 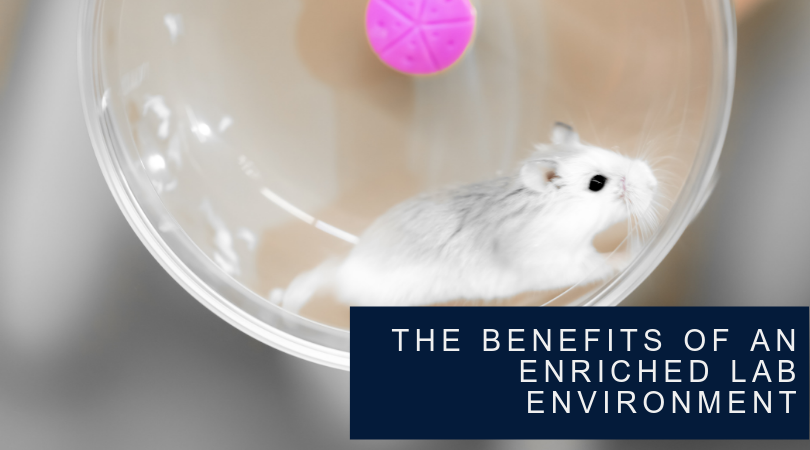 Some researchers have been reluctant to provide environmental enrichment due to the concern that those extra factors would compromise experimental standardization and change how animals respond to various experimental treatments, but that has been found not to be the case. According to the Guide for the Care and Use of Laboratory Animals, Eighth Edition “A systematic study in mice did not find evidence to support this viewpoint, indicating that housing conditions can be enriched without compromising the precision or reproducibility of experimental results.”

An increasing number of studies linking an enriched environment to better research results is leading scientists to trade cheap, sterile, solitary mouse enclosures for an environment that offers companionship, toys, and opportunities to exercise and explore.

It’s not a new idea. In 1947, psychologist Donald Hebb found that rats he raised and allowed to run free in his home were better learners than rats raised in sterile lab conditions. In the 1960s, studies showed that giving lab rats things to keep them active and interested, like blocks and mazes, caused their brains  to develop larger sensory regions.

In 2000, Anthony Hannan, a neuroscientist at the University of Melbourne in Australia, gave research mice cardboard for making nests, brightly colored balls to play with, and ladders and ropes to climb. In addition to being generally healthier and more content, the mice appeared to develop a resistance to neurological disorders and diseases such as Huntington’s, Alzheimer’s, and even depression and autism.

In 2010, cancer biologist Lei Cao created a mouse enclosure with mazes, running wheels, and brightly colored igloos. When injected with cancer cells, the mice housed in the stimulating enclosure developed tumors that were 80% smaller than tumors developed in control mice, and in some cases did not develop tumors at all.

To create a better environment for lab mice and rats, animal welfare experts recommend giving them access to:

Providing a comfortable, stimulating environment that more closely mimics their natural habitat and allows them to behave in a more instinctive way not only makes mice happier, it benefits science as well.