As Government Funding for Scientific Research Continues to Fall, Private Endowment is on the Rise

Successful medical, preclinical, and scientific research requires adequate funding for facilities, supplies, and personnel. Many researchers get grants from the government, but over the last few years, as the government is spending less and less on the science sector, non-governmental sources have been funding a larger percentage of the research undertaken in the United States. 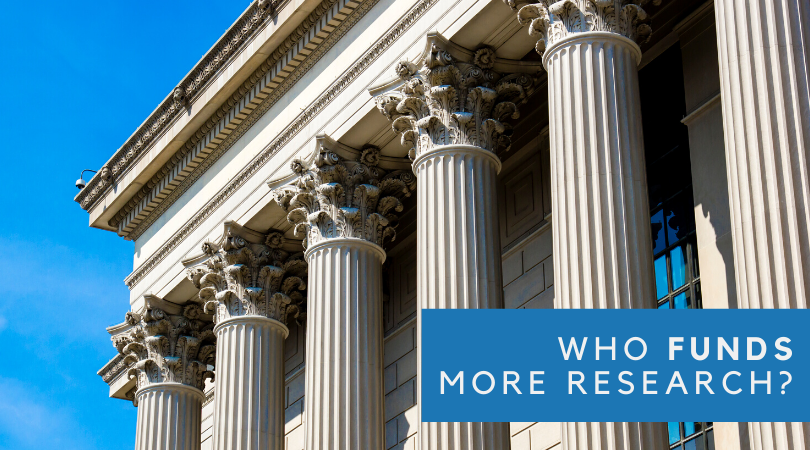 According to ongoing surveys by the National Science Foundation, the percentage of funds that federal agencies are providing for research continues to shrink. From the 1960s through the early 2000s, the federal government accounted for up to 70% of research funds, but that number dipped below 50% in 2013—the lowest it had been since World War II.

Since then, the government’s share in research funding has continued to decline, and the U.S. budget proposal for 2019 called for a 43% reduction in non-defense spending by 2028.

So where is the money for research coming from? Increasingly, it’s coming from corporate and private investors.

On the business side, the pharmaceutical industry was an early driver of the increase in corporate spending over the last decade, with drug companies almost tripling their spending on basic research between 2008 and 2014. Overall corporate spending on research increased from $13.9 billion to $24.5 billion over that same period.

Scientific research spending in the corporate community has flattened out in recent years, however, with a lot of research moving overseas. In the future, U.S-based researchers may benefit less from corporate investment and more from a worldwide movement toward philanthropy.

According to an annual report on philanthropy by the Giving USA Foundation, American individuals, bequests, foundations and corporations made charitable donations totaling $428 billion in 2018. Individuals gave $292 billion, and foundations gave a record-high $75.9 billion, up 7.3% over the previous year.

That increase might be due in part to the Giving Pledge, established in 2010 by Warren Buffet and Bill and Melinda Gates as a commitment by the wealthiest people in America to give more than half their wealth away.

In 2013 the Giving Pledge went international, and as of 2019 more than 200 of the wealthiest individuals, couples, and families in the world have taken the pledge. Each person is free to pledge money to any cause or organization they wish to support, and many have turned to scientific and medical research.

MacKenzie Bezos, who signed the pledge in May 2019 after her divorce from Amazon founder Jeff Bezos, has given money to medical research into cancer and Alzheimer’s disease. In 2017, the Bezos family donated $35 million to the Fred Hutchinson Cancer Research Center in Seattle.

The Bill & Melinda Gates Foundation has given billions to scientific research, including research on infectious diseases, STDs, and HIV/AIDS.

The Michael J. Fox Foundation has given upwards of $700 million to Parkinson’s research

The late Ted Stanley, who co-founded the Danbury Mint, pledged $650 million to the Broad Institute to explore connections between genetics and severe mental illnesses.

As the need for funding grows and government allocations for scientific research continue to decrease, many researchers may find themselves turning to the private sector for the funding they need.